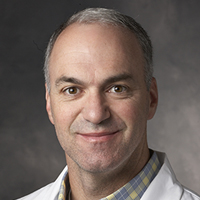 David Fiorentino is a Professor of Dermatology at the Stanford School of Medicine where he has been on faculty since 2002.  He is the also the Associate Program Director and has co-directed a multidisciplinary dermatology-rheumatology clinic since 2004.  He earned his MD and PhD degrees at Stanford.  His doctoral work was in the lab of Gerald Crabtree in which he investigated mechanism of action of macrolide immunosuppressants such as FK506 and rapamycin.  Before medical school he was the key author in the discovery and characterization of interleukin 10.  He did his internship at University of Colorado Health Sciences Center and completed his dermatology residency at Stanford, where he served as Chief Resident.

Dr. Fiorentino has a long history of research in autoimmune disorders.  In his early years, he focused on psoriatic diseases and conducted numerous clinical trials for psoriasis as well as serving as one of the founding steering committee members for the PSOLAR database for psoriasis outcomes.  In the past 15 years, he has shifted his focus to more translational work in lupus and dermatomyositis.  He is interested in mechanisms of skin disease in these disorders with a special focus on the role of interferons.  Additionally, he is focused on identification of novel autoantigens in dermatomyositis that are associated with particular clinical features or outcomes.  His work was the first to identify the clinical phenotype of dermatomyositis patients with anti-MDA5 antibodies.  His most recent research has identified multiple autoantibodies that are associated with protection from internal malignancy in dermatomyositis.  In addition to his translational work using his tissue database, he also conducts several clinical trials for patients with dermatomyositis and scleroderma.  He has also done work to help characterized and validate cutaneous assessment outcome instruments in these disorders.  He is serving his second term on the Scientific Advisory Board for The Myositis Association is a founding member and past president of the Rheumatologic Dermatology Society.